Born in Riga, October 2, 1938. Studied at the Italian National Conservatory in Venice, graduated with a Baccalaureate degree in oboe performance from the Julliard School of Music (1960). Masters degree in conducting from the Manhattan School of Music (1973) and a Doctorate in composition from Rutgers University (1986). 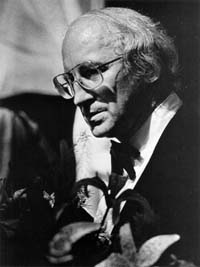 Oboist for the Baltimore and Pittsburgh Symphony Orchestras, and the Metropolitan Opera and New York City Opera Orchestras.

With the Latvian National Opera, staged Gian Carlo Menotti's Christmas opera Amahl and the Night Visitor for the first time in the then Soviet Union; with the National Opera chorus and orchestra staged the Latvian premier of H. Berlioz's Messe Solennelle. At the Liepāja Theater, staged the musicals The Sound of Music and Gundega; Menotti's operas The Medium and Amahl and the Night Visitor.

With the orchestra and soloists of the Latvian National Opera, the choirs "Ave Sol", "Versija", and the Latvian Radio Choir, prepared a concert series on Latvian radio and television, recording 15 cantatas composed by Latvian composers outside Latvia. (1992-1994)

With the choir "Sonore", the New York Latvian Concert Choir, and the National Opera orchestra, prepared and recorded 5 Christmas cantatas by Latvian composers. (1996)

Presented lectures and reflections on Latvian folklore and music at the "College Music Society" and "International Folk Music Council" conferences.

Instructor in the kokle (Latvian zither) for more than twenty years. Directed choirs and orchestras at Latvian children's camps in New York, Toronto, and Garezers.

Our thanks to the music.lv site from which this material is translated