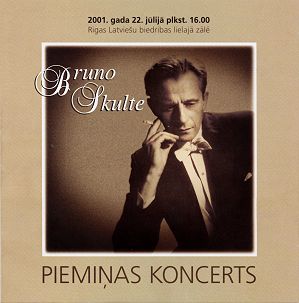 The concert programme cover from
our July 22, 2001 concert in Latvia

In July 2001, most of our choir members headed to Riga, during the city's year-long 800th anniversary. Along with the award-winning youth choir "Balsis", the choir class from Riga's Music School No. 4, solists, and the Latvian National Symphony Orchestra, we performed works by Bruno Skulte at Riga's Latvian Association's (Rigas Latviesu Biedribas) Great Hall.

We also recorded the same works performed at the concert—the compact disk is now available. Our thanks to our partners and friends and most of all to our audience who helped make our concert a success!

Many members of our choir also participated in the 2001 Dziesmu Svetku (Folk Song and Dance Festival) gala/closing concert.

A translation of the program follows.

Bruno Skulte (born 1905 in Russia, died May 19, 1976 in New York) received a good musical education in Latvia. He grew up in his mother's and father's love of music and was encouraged and schooled in music; in 1931 he entered Jazeps 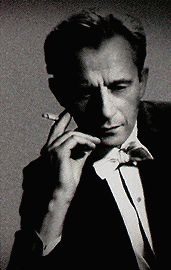 Vitols' composition class in the Latvian Conservatory. Later, he studied conducting in Janis Medins' class. He graduated in 1937. Following was work as an organist, and fulfilling the responsibilities of program director for Latvian Radio. He proved himself a capable and knowledgeable conductor at the podium for Latvian Radio and the Liepaja Symphony Orchestra. Skulte had a rare opportunity to hone his skills, studying conducting in Germany with the Berlin State Opera director, Leo Blech, and in Salzburg, Austria with the notable conductor Clemens Kraus. Skulte could already be counted among the musical elite. After emigrating from Latvia in the fall of 1944, Bruno Skulte directed the Berlin Orchestra, and later led the Oldenburg Latvian Opera. In 1949, the New York Latvian Church invited the composer to the United States, where he spent the remainder of his career as their organist. Bruno Skulte was deeply ensconced in Latvian society and life, and was the most beloved and capable musician in exile. The seriousness of the genres in his creative works testify to this: "Viklacu mantiniece", symphonic works, cantatas, string quartets, and approximately 100 solo and choir songs. That is a great mass of work within Latvian musical culture, which everyone can sample for themselves, thanks to a new recording in the making.

What we will hear today, enriching Latvian musical culture with Latvian composers' music from abroad, is largely in merit to composer Andrejs JANSONS—the fruition of his creative life... his experience conducting and composing, and his professional interest specializing in Latvian folk music. Since the founding of the New York Latvian Concert Choir in 1975, he has seen it as a mission and vital goal to popularize major musical works by Latvian composers. Working together with professional symphony orchestras, A. Jansons has conceived and realized a succession of noteworthy concerts, at which have sounded the operas, oratorios, and cantatas of Alfreds Kalnins, Longina Apkalna, Bruno Skulte, as well as works of other Latvian composers, in the U.S., Canada, western Europe, and Latvia. For more than 20 years, The New York Latvian Concert Choir has commissioned specific assignments and premiered the works of Latvian composers. These works have all been performed in concert, and a portion of them have also been recorded on CD and also preserved in the musical archives of Latvian Radio (works by Ilze Akerberga, Imants Mazaraups, Imants Kalnins, Janis Lusens, Alvils Altmanis, Romualds Jermaks, Juris Karlsons, and others). Each recording is a testament to A. Jansons' professional skill and knowledge, his mastery of musical scores, and his fanatical musical fervor. That has been widely acknowledged and recognized, as many prominent Latvian choirs, orchestras, and soloists eagerly take part in A. Jansons' enthusiastic projects.

The great symphonic poem—a mystery with text by Janis Rainis (composed in 1958-1960)—"DAUGAVA"—is fundamentally judged to be one of B. Skulte's cornerstone works; in its time it was one of the composer's most oft-performed compositions. It was a magnificent segue to B. Skulte's earlier works, among whose staves of notes and musical sounds arose "Nerrs", "Balade par kareivi, kas neatgriezas" [Ballad of the Soldier, Who Does not Return], "Atteiksanas" [Refusal], the opera "Vilkacu mantiece" [Heiress of Vilkaci] composed in exile in Germany, the cantatas "Dievs, tava zeme deg!" [Lord, your Land Burns!], "Lugsana" [Prayer] and other compositions. B. Skulte's most glowing sign—patriotism—is plain to see. Therefore it is no surprise, that for his symphonic poem the composer picked Rainis' deeply symbolic memorial song "Daugava" (as edited by Tonija Kalve). B. Skulte interprets Rainis' dramatic poem as a mystical biblical epic, with characters come to life; those intimate with Ranis' work can anticipate the quotations of folk lore by soloists, narrators, and other participants. More than just the inclusion of folkloric intonations, one feels the coloration of the traditional 19th century romantic style, with all the marks belonging to the genre—the lyrical expression of wounded pain typical of the period, its romantic accents, its expression of deep personal feelings. The poem is fashioned along broad threads with a unique intensity of expression and strong dramatic foundations. In essence, it is a Passion of the Latvian people—easily sensed from the music and striking a chord in one's heart. As the tale unfolds, the solo voices manifest themselves as apparitions symbolizing the heroes and forces in Rainis' epic—Spidola, Imants, Lacplesis, and the mothers of darkness, tears and sorrows... "Daugava" received its premier in 1961 under the composer's baton, commemorating B. Skulte's 10th anniversary as a conductor in New York. Encouraged by the New York Latvian Concert Choir and A. Jansons, the composer began orchestrating his composition. Sadly, B, Skulte was unable to complete the work and did not live to see the final fruition of his creation. A. Jansons completed the the composer's barely begun orchestration; the work received its second premier in its final state, on July 5th, 1977 at Lincoln Center in New York. Since then, "Daugava" has been heard often in Latvian centers and has gained a universal following.

The rhapsody on Latvian shepherds' themes, "GANINS BIJU", was composed in 1965 and first performed in New York under the composer's direction, marking the anniversaries of B. Skulte's 60th birthday and 15 years as a conductor in New York. "Ganins Biju" is composed for kokles [Latvian zithers], pipe, soprano, mezzo-soprano, tenor, and mixed choir. The rhapsody has historic musical significance, in that that it is the first work in the symphonic genre making use of zithers. Working together with the first "zither-ers"—Andrejs Jansons, Birute Surmane, Alis Talgergs, and others, B, Skulte fashioned the zither parts within the technical limits of the instruments and times. This composition has been performed often in the U.S, Australia, and Europe. A. Sturms expressed perhaps the most apt appreciation of this work: " A work based on folk-lore foundations, which in its variety of sound, color and timbre forms the sense of a lively mosaic, a unique addition to the music of our people."

The cantata, "BALADE PAR KAREIVI, KAS NEATGRIEZAS" is lesser known among B. Skulte's works. It was composed in Latvia, before his departure into exile. Nor has it been heard in concert in Latvia until now. But musicians, who have developed closer familiarity with B. Skulte's works, can knowingly say that the composer's characteristic musical hand is already evident in this work. Here too breathes nobility and unbridled musical pleasure. It is no exception to his other works, speaking of B. Skulte's mastery of orchestration, meaning it shares the same characteristics of vivid musical imagery and shows the true artist at work. Thematic illustrative elements and dramatic pathos infuse the composition throughout.

I
BALADE
for symphonic orchestra

Our thanks to the following for their support: